Ruth and The Nation of Israel
J. Deering, AncientPath.net

A number of years ago, John Sherwood and John Glidewell published an in-depth article about cycles of relationships. 1  This article opened the opportunity for the development of many relationship models.

In this study we'll use such a model to define and understand God's method for applying grace to at least three areas that apply to the book of Ruth.

Sherwood and Glidewell's (we'll refer to them as S+G for the rest of this study) original idea followed the path of relationships between people who were in a covenant or contractual relationship to each other. That pattern was very useful when used with marriage spouses or companies and their employees.

Phase One was when the two people involved in this covenant relationship were in good fellowship. S+G named this first part "Sharing Information and Negotiating Expectations." That's what we do when we are in fellowship with one another. We are open, sharing, and we negotiate with each other over the expectations of the details of the relationship.

Then Phase Two is when some of our expectations of the covenant relationship are not met. This leads to a "Disruption of Shared Expectations." The result of this disruption is anxiety, uncertainty, and conflict.

S+G note that there is a better way of keeping a covenant relationship productive and that is to know how the cycle of relationship works and then to introduce into the relationship the concept of using a "Planned Renegotiation." A planned opportunity to re-negotiate expectations before they get to the disruptive part of the cycle.

A really good example of this is the God's concept of Confession. The book of 1st John, Chapter 1, starting at verse 9 introduces the believer to the importance of confession directly to God the Father. These verses indicate that there is no one who can claim that sin does not enter into their lives and separate them from The Father's fellowship. John teaches that the way to grow-up spiritually is to understand the concept of the cycle of Fellowship - Sin – Confession – Fellowship and then put it into practice in you life – not only daily, but moment-by-moment.

God has been in the business of dealing with sinful people from the very beginning. His method follows the revealed plan that is found in ff. So whether it is today's believer or the Nation of Israel (both peoples of a covenant relationship with The Father) similarities can be seen in His outworking of grace to both.

In the book of Ruth we are reading about a time in history when God gave His people (Jews from Judah in this case) judges to rule and correct them. His people were often stubborn and rebellious. When they began marrying women from the surrounding pagan (non God fearing) nations. These women brought with them, into the households of Judah, pagan idols and encouraged their husbands and families to worship them – which they apparently did without hesitancy.

The result was that much of the nation took on idolatry and forsook God Almighty. His anger burned toward them. Through the use of invaders from these foreign nations many Judeans lost their lives as God's anger kindled among them for not forsaking the idols and retuning to Him.

We've created a graphic so you can see how this cycle works for different covenant relationships. Knowing what happened in the past should allow us to take appropriate corrective action in our own lives instead of repeating history. These charts only show what happened historically, they do not demonstrate all the possibilities of complete restoration to fellowship that were possible – but never followed. 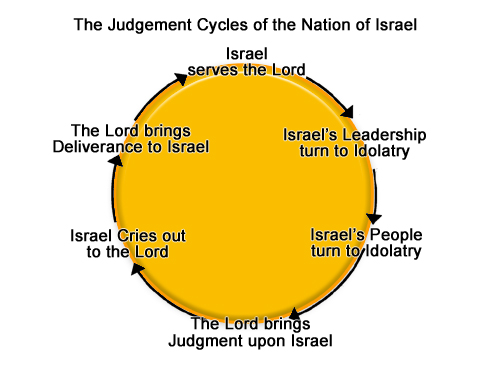 The above graphic represents the journey the nation of Israel travels throughout much of the Old Testament.

In the graphics below you can see this continuing pattern for different times and situations. 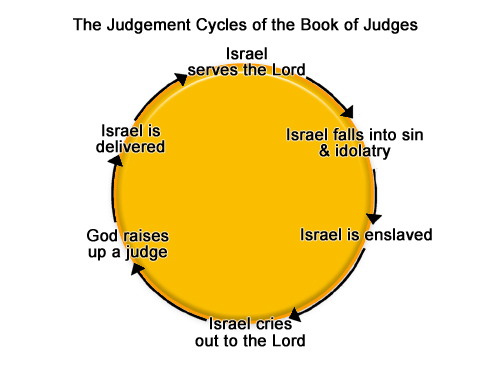 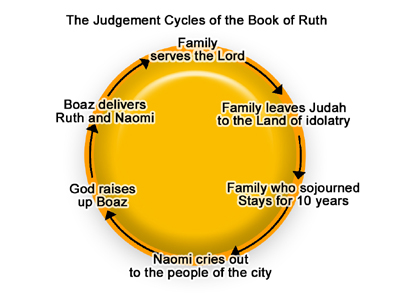 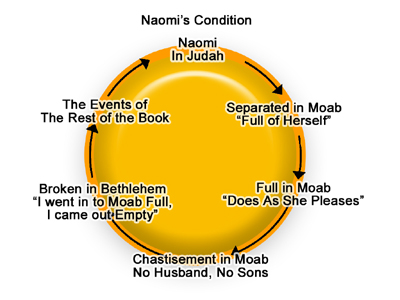 This is the story of Naomi's condition in the book of Ruth. The events of her life follow this same pattern as the nation of Israel – perhaps one of the main reasons this book was chosen for the Old Testament Canon is that the characters of the book each represent a part of this process. 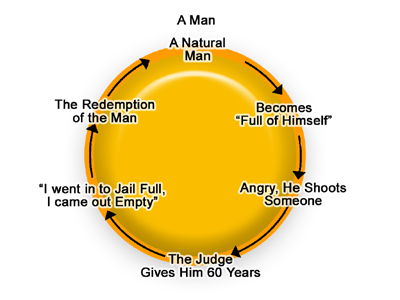 This particular chart just points out how this kind of a cycle works in everyday life among sinning humans. In this case the man finds his redemption while in prison and returns to normal living for a time. Redemption here is used in its broadest meaning and does not indicate that he has found Salvation in Christ Jesus, but restoration to his normal life. 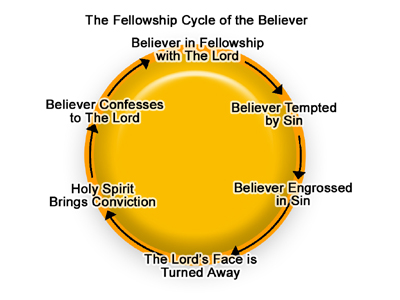 Our last chart follows the process of the believer. Sometimes this cycle is short – for the one who knows how to be diligent in confession to the LORD. Other times the process can be very lengthy when the person involved neglects confession, disregards the motivation of the Holy Spirit, and lingers in sin.

1 Sherwood, John J., and Glidewell, John C., “Planned Re-negotiation: A Communications Model for Organizations and People Relationships”, Original publisher unknown, but available on the web at http://www.dpd3.org/images/Planned%20Renegotiation%20Model.doc, as of 11/20/08.