INTRODUCTION
COMPARISON OF THE FOUR GOSPELS

Properly there is no such thing as a Gospel BY Matthew or Luke or John. There is only one Gospel. Various aspects of that Gospel, as embodied in the Lord Jesus, are portrayed in the writings of the Evangelists. So actually we have before us what might be described as the Spirit-breathed Gospel THROUGH Matthew.

Old Testament prophecies pointed toward a Coming One. There were innumerable prophecies made as to what He would be and do, but all of these come under the general heads of: Christ as a King, a Servant, a Man, and God. This is the purpose of  Evangelists (as the writers of the four gospel narratives are called). They present Christ in these aspects of His life and death and subsequent events. For this reason seeming discrepancies disturb people who look at the Gospels as merely four Lives of Christ.

But this same situation would be presented if one read books about Dwight Eisenhower in the aspects of Statesman, Traveler, Soldier, and Golfer. There would be seemingly glaring contradictions between the view of him as the dignified statesman in full dress and as a rough and ready infantry major, etc. Or take, for instance, our main College building. If a different man were to describe its appearance from each of four positions--front, back, east, and west sides--when these descriptions were compared, there would seem to be ample ground for concluding that they did not refer to the same building, although there would be some points in common. So it is with the Gospels. These books give us the complete view of Christ that the Holy Spirit intended. We therefore need no Apocrypha.

Some very significant words in Old Testament prophecies indicate the distinctive viewpoint from which each gospel writer foresaw Christ's person and ministry:

Matthew - the Zechariah passage does not say "Behold THE king, or the king of the ROMANS" or anything of the kind, because He is King of the Jews, to whom the passage was spoken: "Behold THY King" Matthew is not writing a life of Christ. He is merely setting down those things which set forth Christ as Israel's^ long-promised Messiah King.

Mark - "Behold MY Servant." God is speaking. Christ is not man's servant but god's. He served FOR God at HIS bidding. Christ could have healed all at the pool of Bethesda, but He healed only one; for some inscrutable reason God gave orders that way; He was not the servant of man. That's where these humanitarians go wrong; they think Christ served man primarily. He served God primarily; man incidentally and secondarily.

Luke - "Behold THE Man." Christ is THE second MAN; He has no connection with the FIRST man. His supernatural birth affirms this. He is the Head of a new creation of men. It is the only way He could redeem man.

John - "Behold YOUR God." His deity is emphasized throughout. "The Word was God" (1:1).
For the simple reason that the books are not LIVES of Christ, there can be no such thing as a complete chronological harmony of the Gospels (e.g., Tatian's Diatessaron).

Each Gospel might be compared to a painting. On the canvas of Matthew we have the striking face and carriage of Christ as King, with flashes in the background of Christ as Man, God, and Servant. So correspondingly with others. The characteristic of the particular book dominates the painting, but other phases can be seen at times.

Some peculiarities of each Gospel may be noted:

MATTHEW - King - Jews - (Key question: Who are His ancestors?)

THE GOSPEL ACCORDING TO MATTHEW
Matthew was led by the Holy Spirit to reveal our Lord Jesus as the long-promised Messiah-King. This aspect of our Saviour's ministry was especially aimed at meeting the — need of the Jewish people. Jesus Christ's right to be king is asserted in many different ways in 1:1-11:1.

Philadelphia College of Bible teaches that our Lord was first of all "a minister of the circumcision for the truth of God, to confirm the promises made unto the (Jewish) fathers" (Rom. 15:8). These promises included the land (through Abraham) and a kingly house and throne in perpetuity (through David). So in Matthew our Lord’s genealogy is not traced to Adam (as in Luke's gospel--3:38), but to Abraham and David,

Our Lord Jesus was "born king of the Jews". (2:2) and came into the human family with the throne rights of His father David (Lk. 1:32-33). His herald and forerunner, John announced the imminence of the setting up of that kingdom (promised to Israel in numerous Old Testament prophecies) and conditioned it only upon the repentance of a covenant people who had drifted far from God (3:1-2). Our Lord Jesus took up this message when John was cast into prison (4:12, 17) and .later selected apostles to go over all Israel bearing that message (to Israelites ONLY, 10:5-7). Our Lord announced the principles upon which He would rule when that kingdom is established (The Manifesto of the Kingdom, 5-7). Both John and He warned Israel of the judgment that would follow if repentance was not forthcoming (3:9-10, 12; 10:13-15).

Thus the long-promised Messianic kingdom was offered Israel, but the growing opposition (9:34) of Israel's religious leaders led them to blaspheme the Holy Ghost (12:24), which moral rejection our Lord recognized and responded to with solemn warnings of judgment (12:31-45: 11:20-24). Our Lord anticipated the nation's formal rejection of Him which would lead to the cross (16:21; 27:22, 25), and prophesied a form of the kingdom of heaven (called "the mysteries of the kingdom") which would run its course between the time of His rejection and that of His coming again (13:11,16-17, 34-35). A "mystery" means literally a secret, thus something in relation to the kingdom which had been unrevealed previously.

We are now living in this intervening period between the King's rejection and the King's return. As a result of Israel’s rejection of Christ as King, the nation has been set aside by God in age-long discipline, and the kingdom has been put in abeyance (until the time of its manifestation), until the seed sowing of wheat and tares has produced a harvest (13:36-43). Our Lord pre-announced and identified the Church as His instrument of witness during the period of the setting aside of Israel (16:18-19).

Israel will not "see Him again" until a substantial portion of them repent (23:39) in response to the re-announced message of the coming King and kingdom, which ministry will be interrupted by Christ's return (10:23). At the close of that period of Tribulation, climaxed by Christ's return to earth, the hearers of that message of a returning King will be judged on the basis of their attitude of faith or disobedience toward the bearers of the message (25:31-46). This is more properly called the Judgment of the Gentiles.

The book closes with the great facts of our Lord's death and resurrection, 26-28.

Here is a chart of major Bible events, showing the relation of the book of Matthew to them: 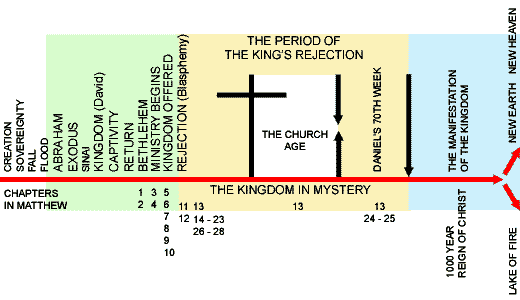