There are four portions of the notes on this chapter (plus Addendum IV, "Kingdom of Heaven" and "Kingdom of God" Synonymous"). They are: a Summary, an Exposition, General Principles, and a Chronological Preview of "the Kingdom in Mystery."

FIRST: A SUMMARY OF CHAPTER 13

SECOND: AN EXPOSITION OF DETAILS OF THE SERMON 13:3-50

THIRD: SOME GENERAL TEACHINGS OF THE CHAPTER SHOWING CHARACTERISTICS OF THE WHOLE PERIOD OF THE KING'S REJECTION

FOURTH: THE ORDER OF THE PARABLES SUGGESTS A CONSECUTIVE CHRONOLOGICAL PREVIEW OF THE WHOLE PERIOD OF THE KING'S REJECTION, similar to that given by our Lord in Revelation 2 and 3, in His messages to the Seven Churches. (The inner off-white box indicates the extent of the Church Age from Pentecost to the coming of our Lord to the air. Thus, the Church Age does not cover the whole period of the "Mysteries of the Kingdom," shown as the light blue box. The pink box covers the time from the change in the attitudes of the leaders of the Nation of Israel to His physical return to Earth, "From the King's Rejection to the King's Return.")  (This paragraph edited to reflect a different drawing style from the Mason Notes original. ed) 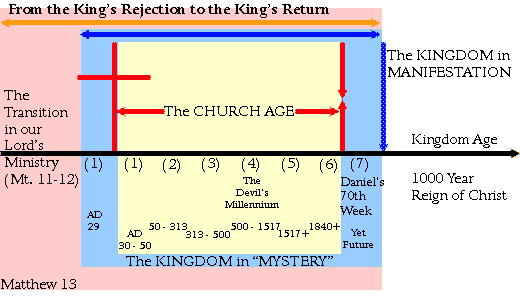 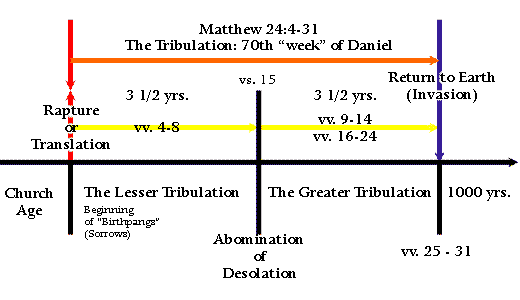