Clarence E. Mason, Jr., was born on November 12, 1904, in Charlotte, North Carolina. He received his B.A. degree from Wheaton College in 1924 at the age of 19. An avid sportsman, Clare excelled in Basketball, Tennis, Baseball, and Football and was inducted into the Wheaton College Athletic "Hall of Honor." As a member of the first graduating class of Dallas Theological Seminary, he earned the Th. M. degree at 23 years of age in 1927. Wheaton College again honored him in 1940 with the D.D. degree.

He began teaching part-time at Philadelphia School of the Bible in 1927 and became "part time" dean five years later and left the pastorate in 1946 to devote his full attention as academic dean to the growing School. His teaching was greatly influenced by his Bible teachers at Dallas like H. A. Ironside, Lewis Sperry Chafer and Griffith Thomas.

He was influential in the 1951 merger of Philadelphia School of the Bible with the Bible Institute of Pennsylvania, and in recognition of his increasing roles, the College, by then Philadelphia College of Bible, promoted him to vice president for academic affairs in 1956. His tireless energies were largely responsible for the expansion of the School in 1957 to a four-year Bible college offering a degree recognized by the State of Pennsylvania. Setting the pace for Bible colleges across the country, Dr. Mason then spearheaded the efforts to earn Middle States Association membership for PCB in 1968.

Upon his retirement from the office of dean in 1969, Dr. Mason became the first occupant of the C. I. Scofield Chair of Bible Exposition. Five years later, he shifted his energy to the Evening School of Continuing Education. At the time of his death he was coordinator of the program on the main campus.

Many considered Dr. Mason the foremost authority on the Scofield Reference Bible. His ability to quote page and column awed generations of students. As a member of the editorial committee which spent 14 years revising and updating the Scofield notes, Dr. Mason left a permanent stamp upon the 1967 edition. In 1981 he was again recruited by Oxford University Press to serve on a committee of three to integrate the Scofield notes and cross references with the New International Version -- a task he attacked with gusto. This latest version was released in 1984.

But Clarence E. Mason, Jr., was more than an educator and scholar. He was married to Lois McShane Mason (1904-1997), and was the father of two children, Robert and Elizabeth.  He was also a frequently published writer, contributing to such periodicals as the Sunday School Times, Bibliotheca Sacra, King's Business and Seek. His books and pamphlets include Prophetic Problems, Dispensationalism Made Simple and Love Song.

Clare Mason was an historical dispensationalist with a very holistic, open, and questioning mind.  His doctrine was deeply fundamental, but his theology was pragmatic.  All through his life, he continued to study, and was never afraid to challenge his own thinking and change it.  To him, Dispensationalism was not a set-in-cult, but a way to view the scripture holistically.  His mantra was "The Bible is all written FOR us, not not all TO us."  He viewed Dispensationalism as a theological method that helped the believer to navigate his Bible.  God was an unchanging God and salvation was always by grace through faith, no matter when or where it was found in scripture.

His teaching profoundly changed thousands of students; his grasp of Scripture illuminated the Bible for millions; his commitment shaped and stabilized a major Christian institution, now Philadelphia Biblical University, for half a century. 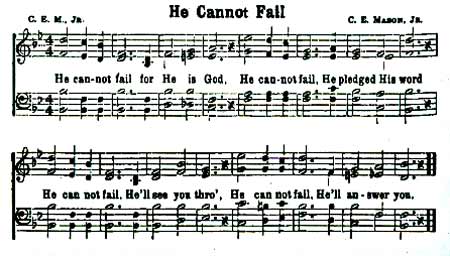