THE PARABLES OF JESUS, #015
A Chronological Study

"To Him who opened His mouth in parables and
uttered things hidden since the creation of the world."
Psalm 78:2

[Mt 13:31] “The kingdom of heaven is like a mustard seed, which a man took and sowed in his field; [Mk 4:31b] when sown upon the soil, though it is smaller than all the seeds that are upon the soil, yet when it is sown, it grows up, and becomes larger than all the garden plants and forms large branches [Mt 13:32c] and becomes a tree, so that the birds of the air [Lk 13:19b] nested in its branches.”

Jesus and His Parables

[Mk 4:33] With many such parables He was speaking the Word to them, so far as they were able to hear it;

Two lessons ago we dealt with Jesus’ parable “The Sower, the Seeds, and the Soils.” It was a lengthy study and full of context and details. We learned along the way that Jesus’ plan of action through these parables was to describe important kingdom details in such a way that those whom God had prepared to hear the meaning would hear it, and those whom God had not prepared would not hear it. Here in this first verse from Mark’s Gospel telling of this story Jesus again confirms this process.

Jesus’ relationship to God the Father and God the Holy Spirit. [Mk 4:30] And He said, “How shall we picture the kingdom of God, or by what parable shall we present it?

We’ve mentioned before that The Son of God, Jesus, during His earthly life and ministries, had willingly given up certain use of His attributes as God in order to come to earth and become God’s willing servant in the matter of expressing God’s grace and love for those who would believe upon His Son.

Here, in this short parable we see evidence of that relationship. We can see it here when Jesus asks, “How shall we picture the Kingdom of God, or by what parable shall we present it?

A Description of the Kingdom of God

Here in Luke we find the continuation of that question. Jesus is asking for guidance from His heavenly Father. So far in our chronological study of these parables we’ve learned what kind of people qualify to enter into the Kingdom of God.

When we stepped into the parables of Matthew Chapter 13, we entered into “The Parables of the Kingdom.” We began that part of our journey with the first 23 verses of the chapter and “The Sower, Seeds, and Soils,” and we found that God sows His Word and only a selection of those who hear it will actually believe and eventually enter into that Kingdom.

So Jesus now asks His heavenly Father for the right parabolic image to tell his disciples so they might understand this part of the descriptions of the Kingdom of God.

Briefly, we need to understand Jesus’ expression, “The Kingdom of God” and “The Kingdom of the heavens.” The two terms are largely synonymous. God is sovereign over all creation. The Bible says that Jesus held the power of creation and that God (the trinity) knows all things – right down to each blade of grass and the welfare of even the sparrow. God is sovereign over the various kingdoms of man on earth. Specifically, God is sovereign over His chosen people the descendants of Abraham. The context of these parables is the works of Jesus among the people of Israel in their land of Israel – so we will focus our comments upon that “kingdom.” We found that Jesus is The Born King of this kingdom. We need to know that “this kingdom” is a miniature version of “The Kingdom of God” – the big picture. Specifically, the people of Israel had been in long-term expectation of finalizing their promise of corporately entering into the Promised Land Kingdom that was promised to them by God, through Abraham, Isaac, and Jacob. That promised was never completely fulfilled. In these verses we see Jesus telling His disciples what that Kingdom is like.

The Kingdom of God is like… a mustard seed

[Mt 13:31] “The kingdom of heaven is like a mustard seed, which a man took and sowed in his field;

This is a simple illustration. We could try to make all kinds of assumptions that would lead us nowhere. So, lets try to keep it simple and see where it goes.

The image is easy to understand. Visualize yourself out standing in a field and you have a single little seed and you plant it with the purpose of it growing and being fruitful.

The Kingdom of God belongs to God. The field would be the area over which He is sovereign, the context of the parables is Israel. So, this seed and what happens to it represents what God’s sovereignty for the nation of Israel in regards to the expected Promised Kingdom.

Jesus simply describes the qualities of this little seed. It’s tiny, but when it matures it becomes exceedingly large.

This part of our picture seems easy – The Kingdom of God, expressed as the Nation of Israel in it’s quest to attain to the Promised Kingdom started off with just Abraham and the fullment to the promise would be a kingdom who’s people numbered greatly.

Here we have a very good definition of the promise and how the “seed” will grow exceedingly. 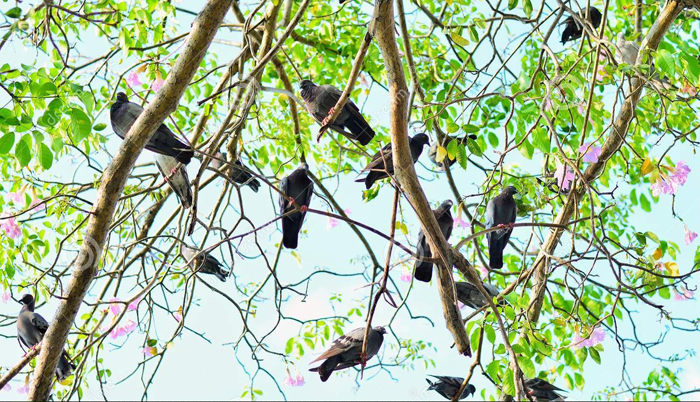 "The Birds In The Trees"

Now we have one small detail left to consider.

Scholars are divided into two groups on this single phrase. I’d love to be so brilliant that I can tell you which ideas are what Jesus intended, or which the disciples understood… but I too can see both ideas, as both are true of what Jesus was experiencing in that Kingdom of God known as Israel during His time on earth.

First, the positive group. Simply put, the Kingdom of God grows and grows from a small beginning to a very large Kingdom, and “the birds of the air,” everyone who comes to that kingdom, makes their “nests”, homes there and are all safe. I like this answer because that is what I expect when it’s my turn to enter into that final heavenly Kingdom. Peace and safety will be found there in abundance.

Second, the kingdom of Israel focused group. Throughout the Scriptures birds are seldom described as good things. Yes eagles, who spread their wings of power and shelter, are positive things, but common birds are more often seen as representative of things evil. So, if our birds are evil…?

Jesus speaks often of the scribes and Pharisees as evil. Could it be that this image of the birds represents those evil forces which infiltrated the Jewish religious system and slowly perverted it. It was they who called His miraculous works as being powered by the devil and called Him Satan. A fact that will never be forgiven them.

Why do these scholars bring this up? Because this parable is right in the middle of parables that all speak of the evil brought in by the scribes and Pharisees. Why would Jesus put in a very small, very positive little parable about the Kingdom? There lays our dilemma.

What is my recommendation? Consider these two opposing ideas as two sides of one coin. Jesus didn’t go on to explain His meaning of the “birds.” Both sides of this coin give us a great deal of area for thought and exploration of the truth contained in God’s word.

They also should give us pause as we consider our age of the Church, the Body of Christ. The writers of the epistles give us great warnings to be aware that men and women of evil can get involved with the local church and attempt to pervert it. We can see all around us the continuing dissolution of churches, and church doctrines. Many of us can point to places and times we know where the evil one has entered into a local church and destroyed it. Of all the churches in your area… how many teach the Gospel, how many are Bible centered, how many loudly proclaim the name of Jesus? Lots of food for thought.

According to what Jesus had to say in previous parables God had made it so that those who would not believe could not understand the teachings hidden in a parable, “lest they would return and be forgiven.” [Mk 4:12]

Jesus is talking about His Kingdom and about Himself. In the previous parable He identifies Himself (God) as the one who plants the seeds.

The context indicates that Jesus is sowing His seed in the nation of Israel (the promised people awaiting deliverance into the promised Kingdom of God). By secondary application His words also apply to us who believe as we await His second coming. 4.                 What is good about the growth of this seed?

God’s plan from the beginning was for creation to “go forth and multiply” [Plants, animals, and especially mankind]. This seed grew from a very small seed to a very large tree. 5.                 What is bad about the growth of this seed?

Birds of the air came and nested in this tree. In the scriptures birds who come all turn out to be evil with the exception of the eagle. We can assume that Jesus is warning His listeners that among all this splendid growth – evil has come to roost there as well. 6.                 What do you think is the message of this parable?

This is a hard parable to completely discern. If the birds are good – finding safety in the tree, then we could see the growth of “The Kingdom of Heaven.” The only downside to this interpretation is that the nation of Israel and the believers of this age are really only a remnant out of all those who call themselves believers – and that doesn’t really fit the small seed to exceedingly large tree metaphor.  If the birds are bad – entering into a general world growth from little to large, then we could see what we know happened to Israel. It started small and grew large several times. Each cycle the religious leadership of the nation became corrupt (the birds) and led the nation in rebellion against God. This is very apparent at the time of Jesus, the Son of God, who was persecuted by the religious leadership even unto death. But, the question is… What do you think?

[1] All scriptures are from the NASB unless otherwise noted.