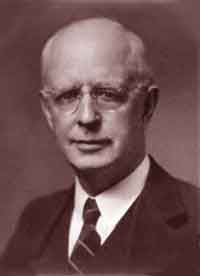 When Scofield died in 1921, Chafer moved to Dallas, Texas to pastor the First Congregational Church of Dallas where Scofield had ministered. Then, in 1924, Chafer and his friend William Henry Griffith Thomas realized their vision of a simple, Bible-teaching theological seminary and founded Dallas Theological Seminary (originally Evangelical Theological College). Chafer served as president of the seminary and professor of Systematic Theology from 1924 until his death. He died with friends while away at a conference in Seattle, Washington in August 1952.

Audio Recordings of Dr. Lewis Sperry Chafer Addressing Students of
Dallas Theological Seminary in Lectures on the Spiritual Life: (c 1948)
Dr. Chafer was approx. 77 years old when these recordings were made.

The original recordings exist elsewhere in the public domain.
The files on this site have been digitally enhanced for intelligibility.