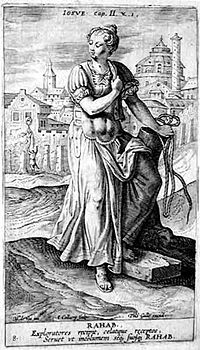 For this part of the story we need to go back to the Story of Joshua and the city of Jericho.

: Two spies secretly from Shittim to Jericho came to the house of Rahab (a harlot's house (Heb: Zanah, an adulterer) (Some scholars, especially Jewish, deny that Rahab was a Harlot, but only on the basis of their system of theology, not upon the translation of the Bible.) and they lodged there.

There was an information leak and the king heard that there were spies in Jericho, and that they might be staying with Rahab (2:3). Rahab hid the two men (2:4) in bundles of Flax on her roof (this story takes place at the time of the Barley Harvest - Just like in Ruth, and Flax is one of the harvests in this the Last Harvest of the year) and told the king that they had been there, but had left.

Rahab told the two spies that she knew of their God, and the miraculous things He did during the Exodus and since the Hebrews were in Canaan. "For the LORD (YHWH) your God, He is God in heaven above, and in earth beneath, now therefore, I pray you, swear unto me by the LORD, since I have showed you kindness ... and that ye will save alive my father, my mother, my brethren, and my sisters, and all that they have, and deliver our lives from death."

Rahab lets them out of the city by sliding them down a cord from her window in the wilderness side of the city wall.

In God tells Joshua that He has given the city of Jericho over to the Hebrews. Take the Ark of the Lord and Priests and walk around the city seven times and then blast your horns, have all the people shout, and the walls will come down. The Lord said, "Only Rahab the harlot shall live, she and all that are with her in the house, because she hid the messengers that we sent." So Joshua, the Priests and the people do as God had said and “The Walls of Jericho, Come-a Tumblin’ Down!” And Ruth and her family are saved from the destruction into the house of Israel.

Here in Ruth we hear of Rahab once again. And one could consider if indeed Salmon was one of the spies who Rahab had rescued - Love at first sight? But there is no scriptural evidence for drawing this conclusion - only possible.

She then becomes the Rahab that is listed in the genealogies of Christ in Matthew and, as the wife of Salmon and the mother of Boaz who is not listed in the Luke dialogue.

Ruth herself is a woman of Moab, a Moabitess. The Moabites were those people who descended from Lot, the cousin of Abraham. Lot’s oldest daughter, after her mother was turned to a pillar of salt by the Lord (for looking back at Sodom and that way of life with yearning in her heart) slept with her father – Lot (he did not know it was her) and the incestuous child that results is named Moab. Moab becomes a people and where they congregated was known as Moab. It is South-East of Jerusalem and Bethlehem, on the other side of the Dead Sea.

Lot’s younger daughter, who also did the same thing to him, became the mother of Ammon, and the people and land of the Ammonites, the land just North of Moab.

The interest of the book centers around the Names on each page. The major lessons learned will be from the study of the relationship between Boaz and Ruth, the story of two Children of Faith, Loyal, Beautiful Souls, Simple, Trustful, and Triumphant. It is the story where “the Kingly line was ordered in the midst of infidelity, through faithful souls.3”